Rewind to 4 Oct 2006. Professor Gunnar Öquist, Secretary General of the Royal Swedish Academy of Sciences, has just announced the Nobel Laureate in Chemistry for that year - Roger D. Kornberg. Unusually for one of the science prizes, it was unshared - Kornberg was the sole recipient of the prize.

It was awarded for Kornberg's fundamental studies on transcription - the process by which the information stored in the genes is copied and transferred to those parts of the cells that produce proteins. Kornberg was the first to create an actual picture of this process at the molecular level in eukaryotes - a group of organisms that include everything from fungus to humans!

Constant transcription of the genetic information in the DNA is a central process for all living beings. The DNA-molecule itself lies protected within the cell nuclei. The genetic information therefore needs to be copied and transformed into "messenger DNA", which can then move the information out from the nucleus and to the protein-producing part of the cell. These proteins can then construct the organism, and define its function. Any interruptions in transcription can have severe consequences - illnesses such as cancer, heart disease and many inflammatory diseases have links to disturbances in the transcription process. Roger Kornberg was the first to create an image of this process "in action" - and these images make it possible to understand the molecular mechanisms governing transcription. 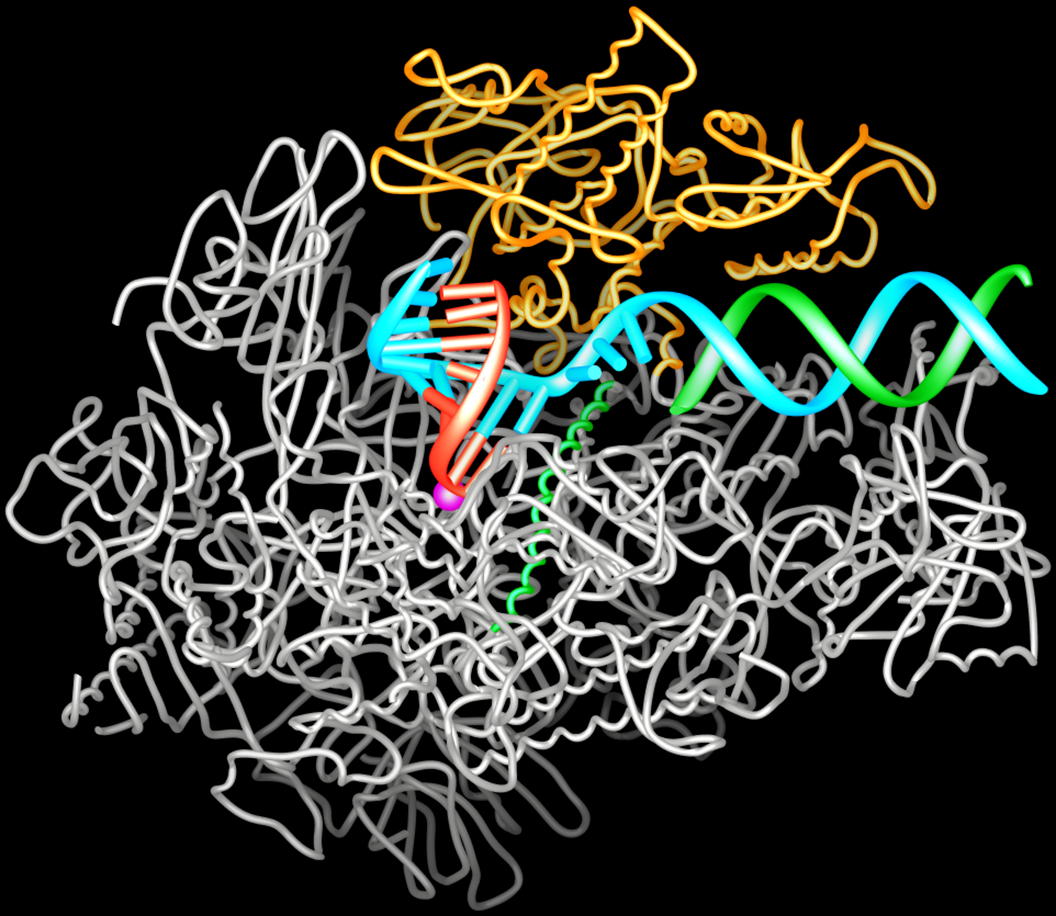 Figure 1. The transcription process as depicted by Roger Kornberg in 2001. RNA-polymerase in grey / white, DNA-helix in blue and the growing RNA-strand in orange

Now back to 2014 - in early April, Roger Kornberg talked about his incredible discovery, and much more, in packed lecture theatres in Gothenburg and Copenhagen as part of the Nobel Prize Inspiration Initiative (NPII). His first visit was to the University of Gothenburg, where he spoke to students and staff from the hosting university and from Chalmers University of Technology. 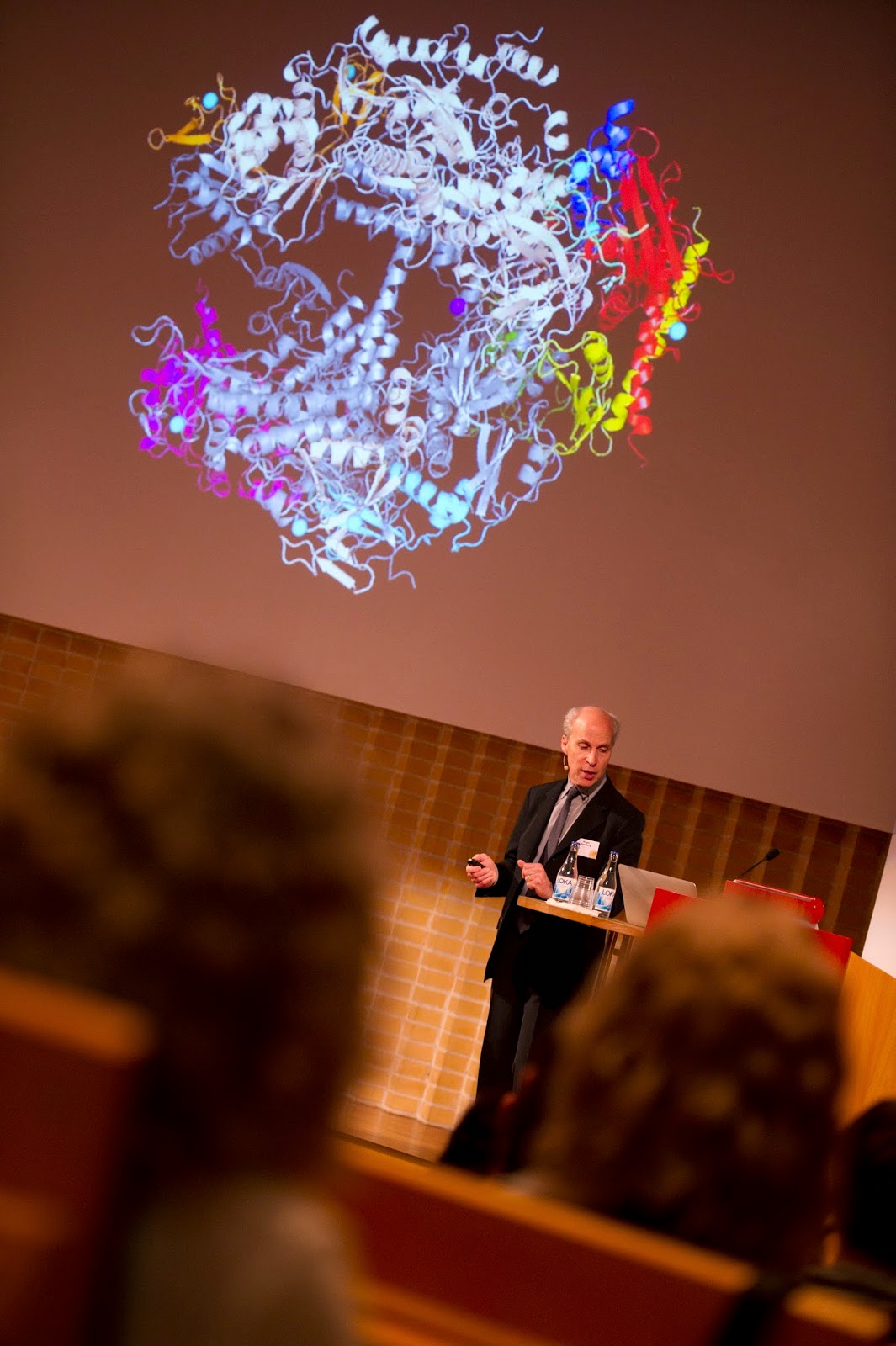 The talk was incredibly-well received and the audience Q&A offered some fascinating debate and discussion. 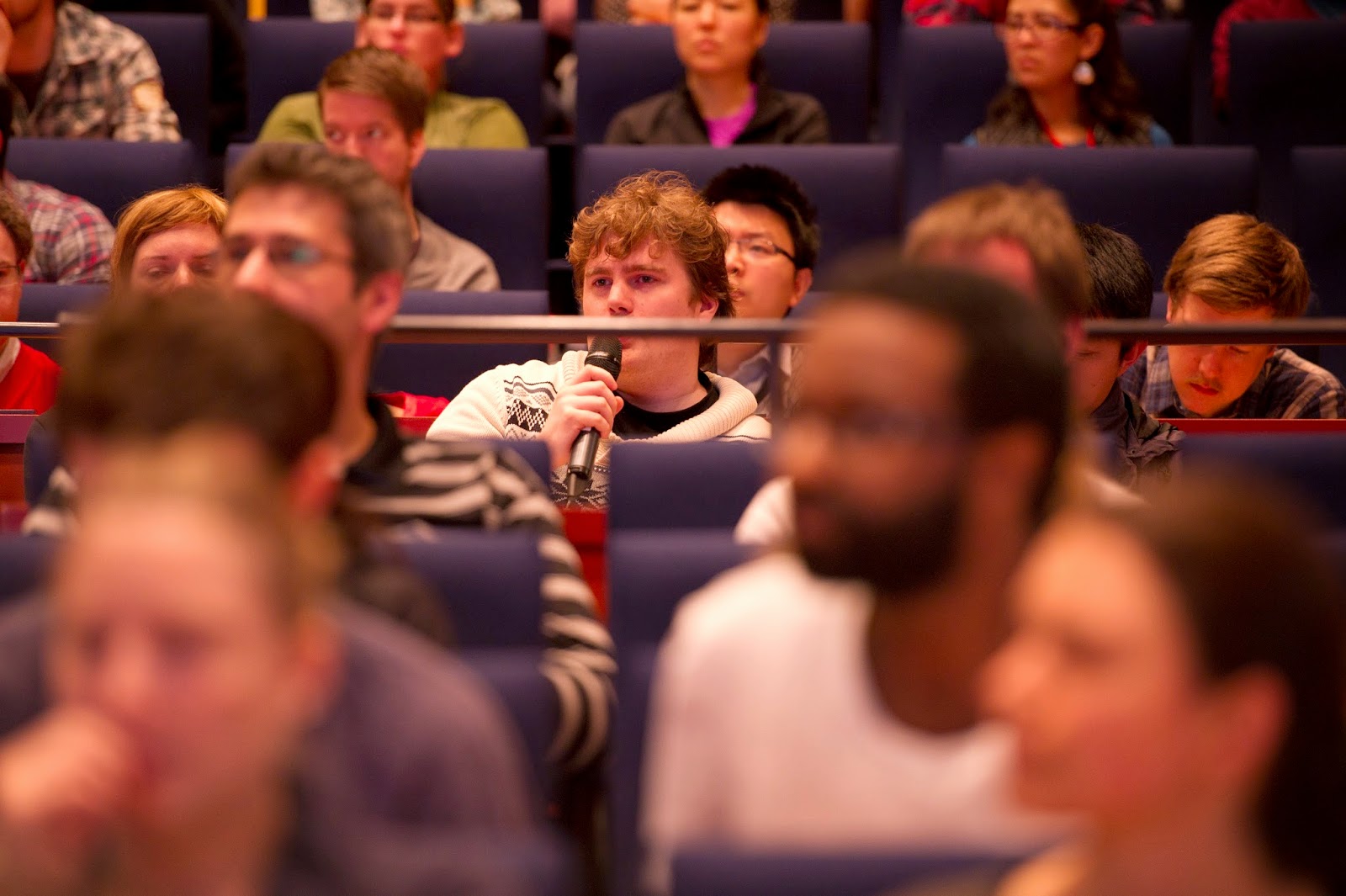 My favourite part of our NPII events are always the roundtable sessions with students, postgrads and postdocs, and the group from GU and Chalmers didn't disappoint! Questions ranged from how to maintain a good work-life-balance, to what the Nobel Prize means to a scientist. Collaboration and publishing were also discussed and debated, and both the students and Dr Kornberg left the session feeling invigorated. As always, we filmed the whole session and the highlights will be shared as short clips on the NPII website in the coming months - keep an eye out! 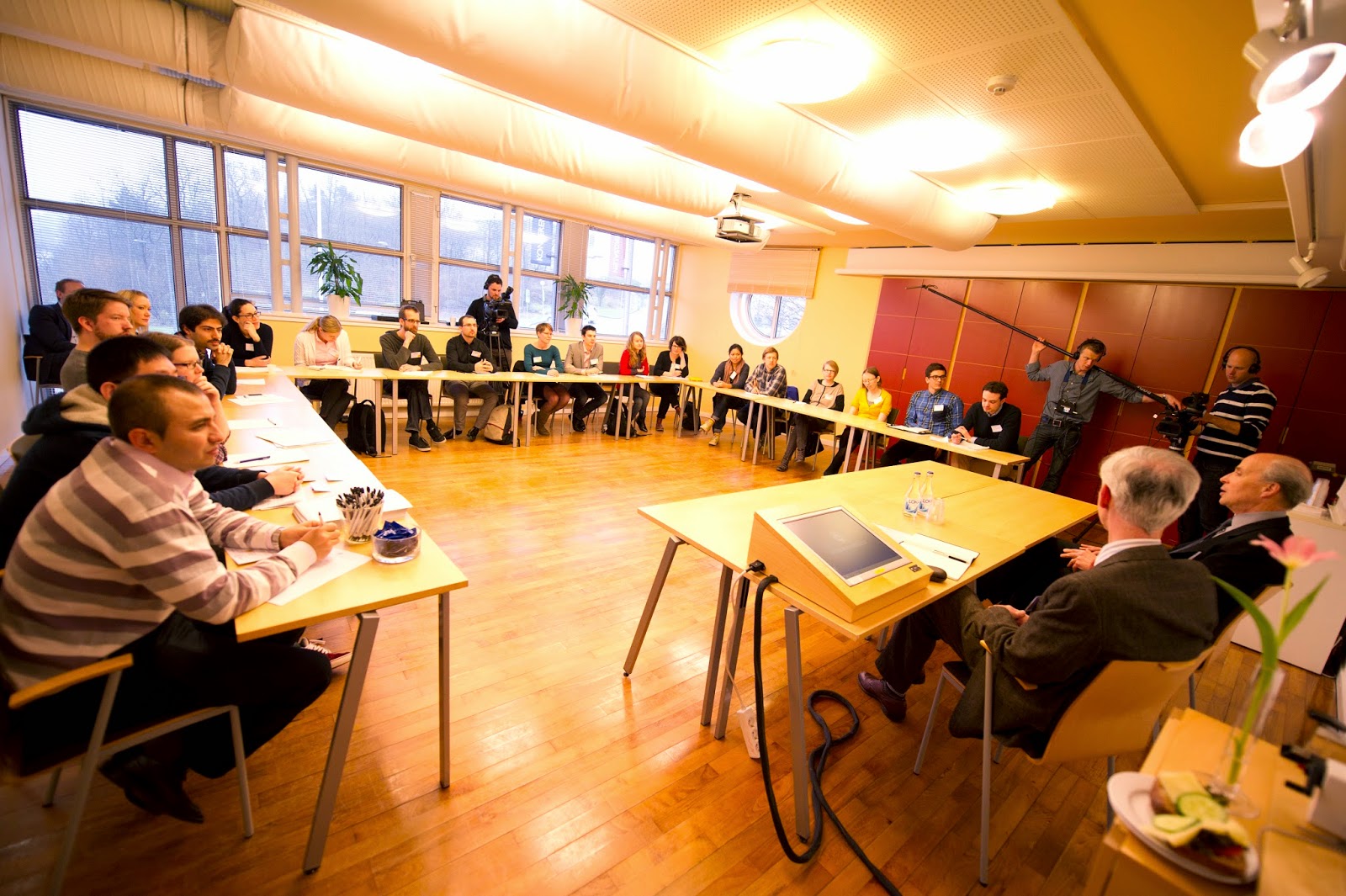 After an interview with a local journalist and a delicious lunch with other junior scientists, it was off to the next venue - AstraZeneca Mölndal. AstraZeneca are our partners on these events, and we were very excited to get to their Swedish research HQ. The atmosphere was a little different at AZ - Dr Kornberg didn't speak about his science, instead he took part in a fascinating discussion on the importance of creativity in innovative science. The AZ staff turned out in huge numbers - there were people sitting on the auditorium steps. We even had to set up an "overview" area in the canteen for those who couldn't get in! 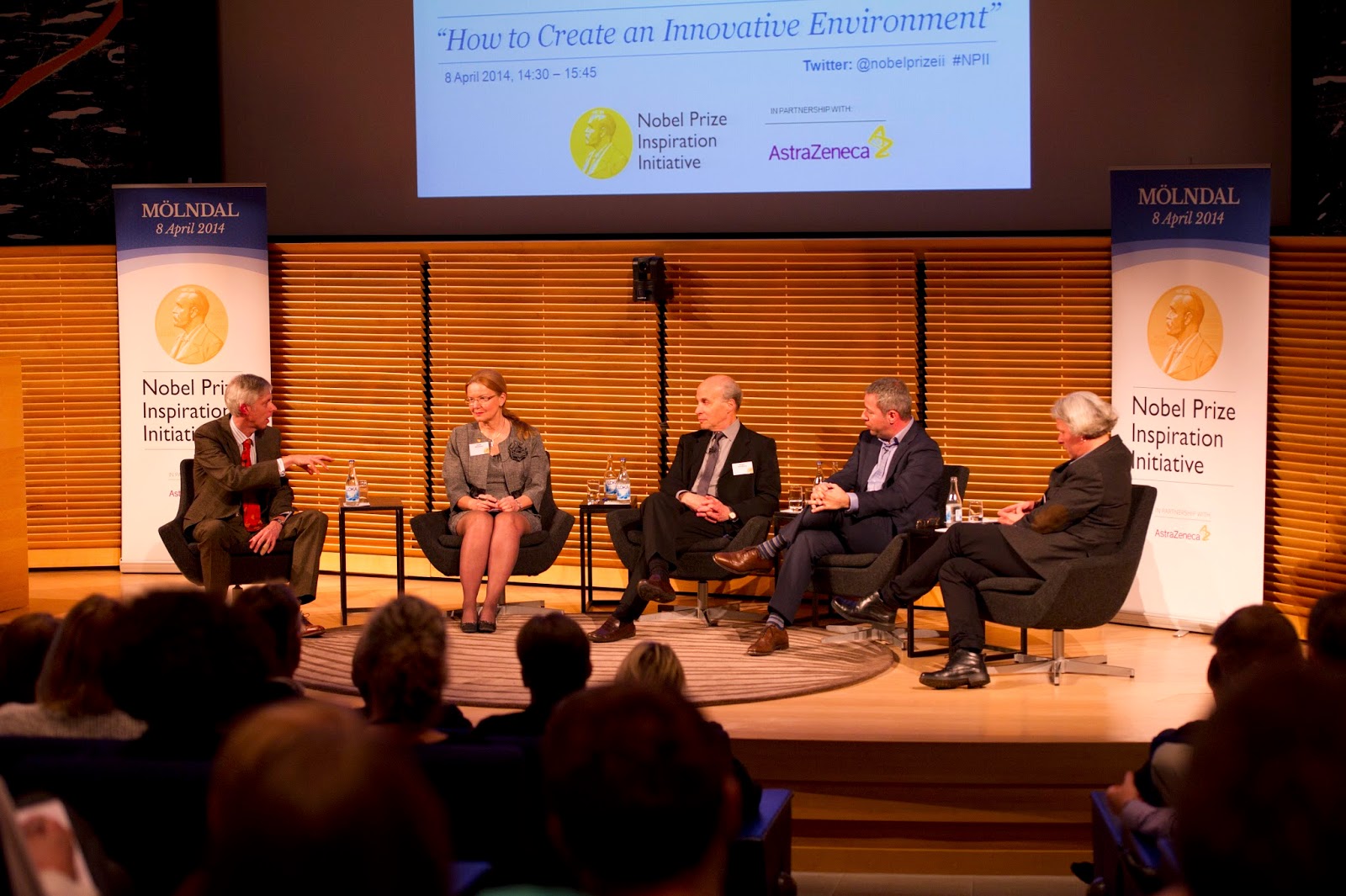 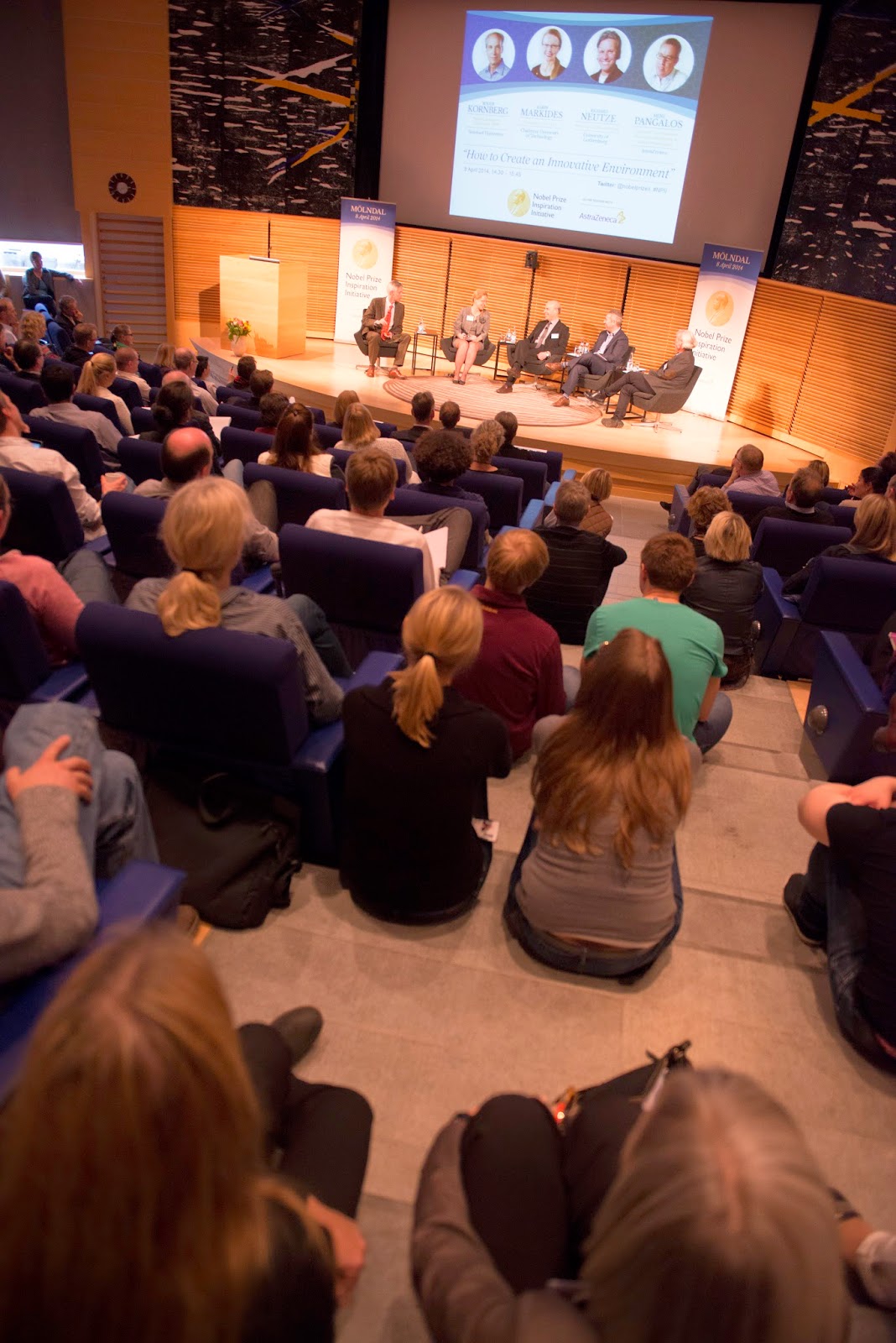 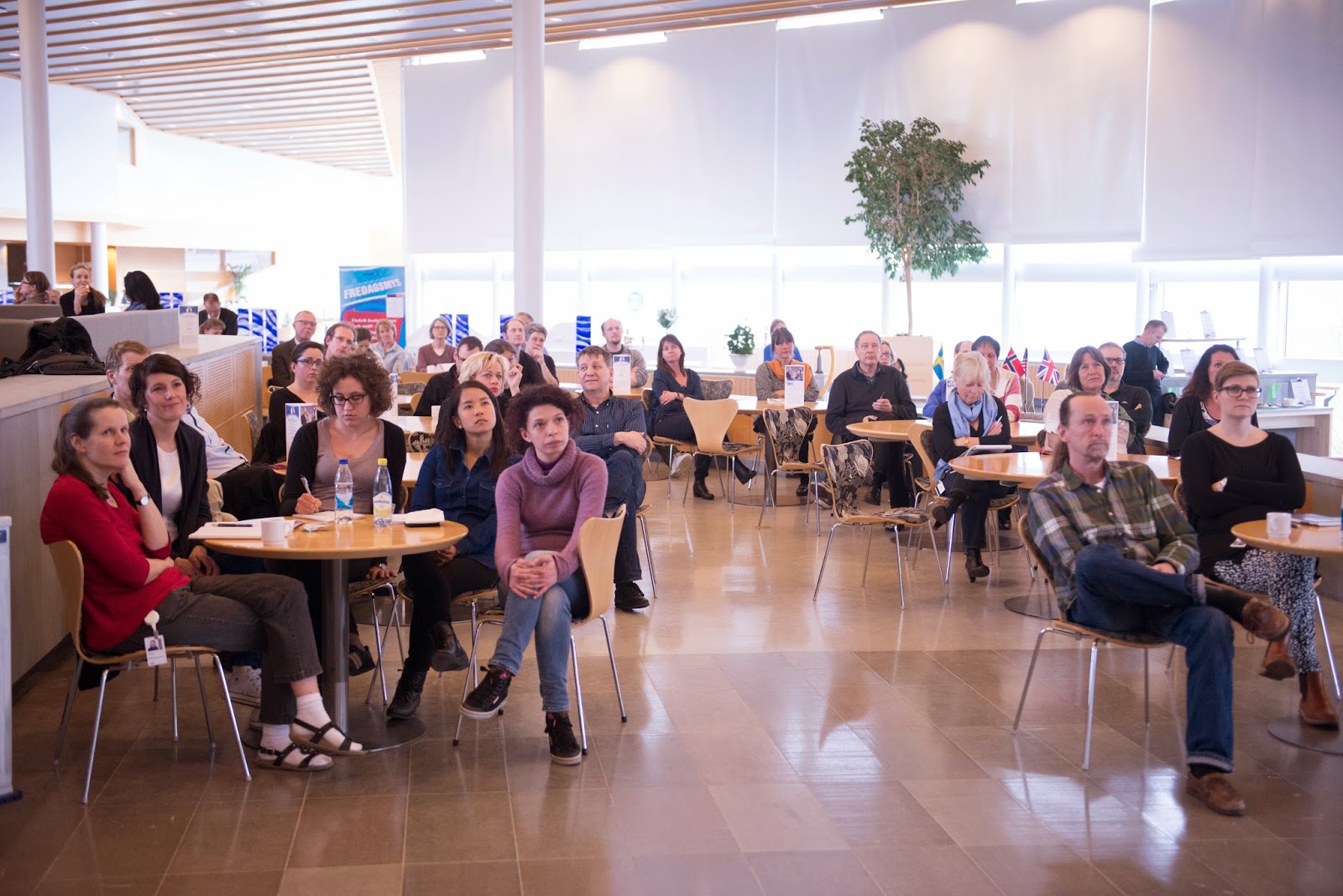 Roger Kornberg was joined by three other guests: Karin Markides, President and CEO of Chalmers University; Mene Pangalos, Executive Vice President of AstraZeneca’s Innovative Medicines and Early Developments arm and Richard Neutze, Professor of Biochemistry at the University of Gothenburg. This discussion was led by Adam Smith, Chief Scientific Officer at Nobel Media AB - you can watch it in full here: http://www.nobelprizeii.org/videos/panel-discussion-create-innovative-environment/

The next day, we were off to Copenhagen, to the amazing venue, The Black Diamond, to meet students and staff from the University of Copenhagen and the Technical University of Denmark. 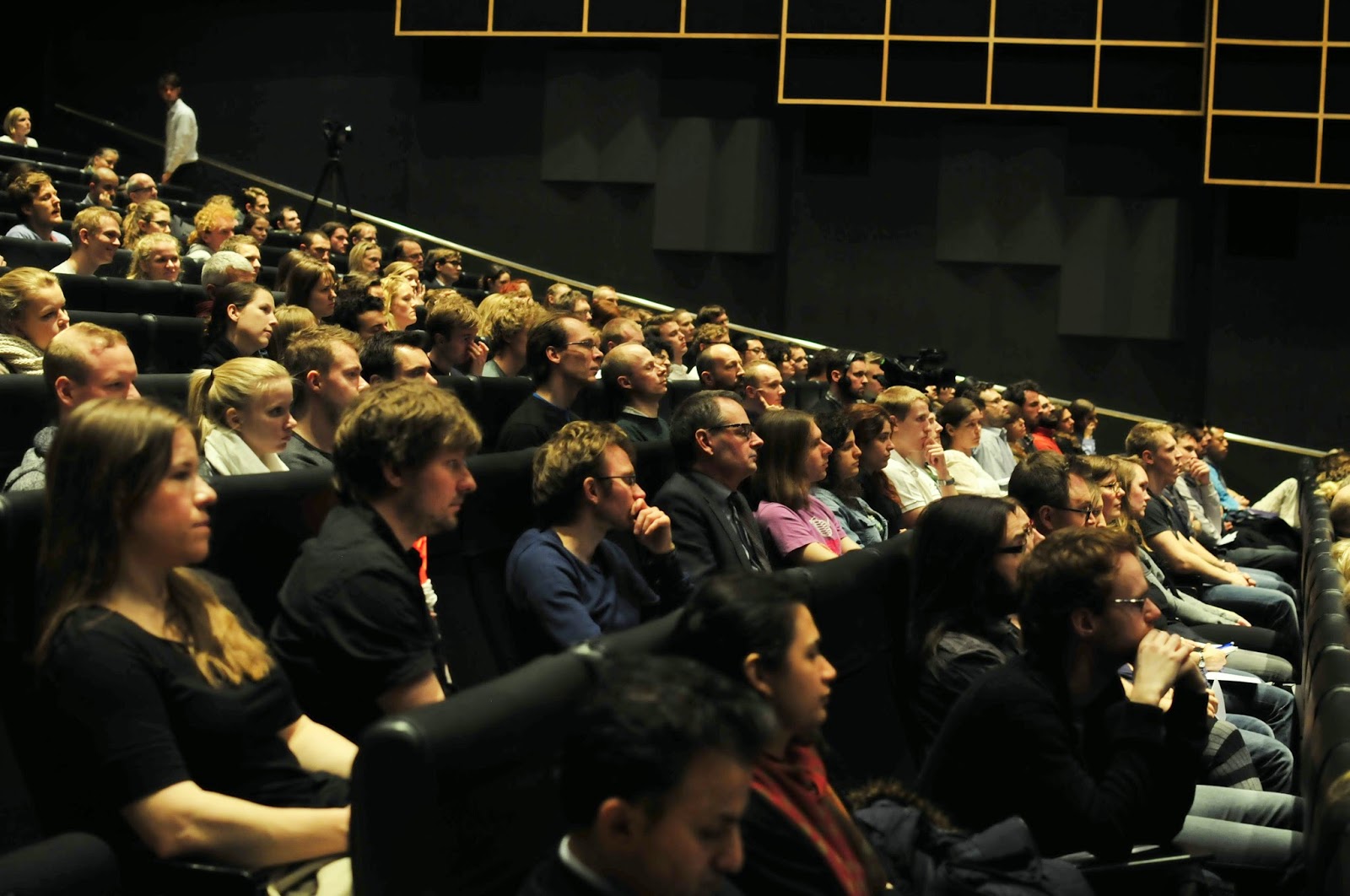 Another brilliant lecture from Roger Kornberg - entitled "The End of Disease" - led to a jam-packed Q&A session with the audience. As in Gothenburg, this was followed by a round table session with young scientists from both universities. They talked about Dr Kornberg's childhood - as the son of another Nobel Laureate, he has some interesting insights on what the Prize means to a scientist! 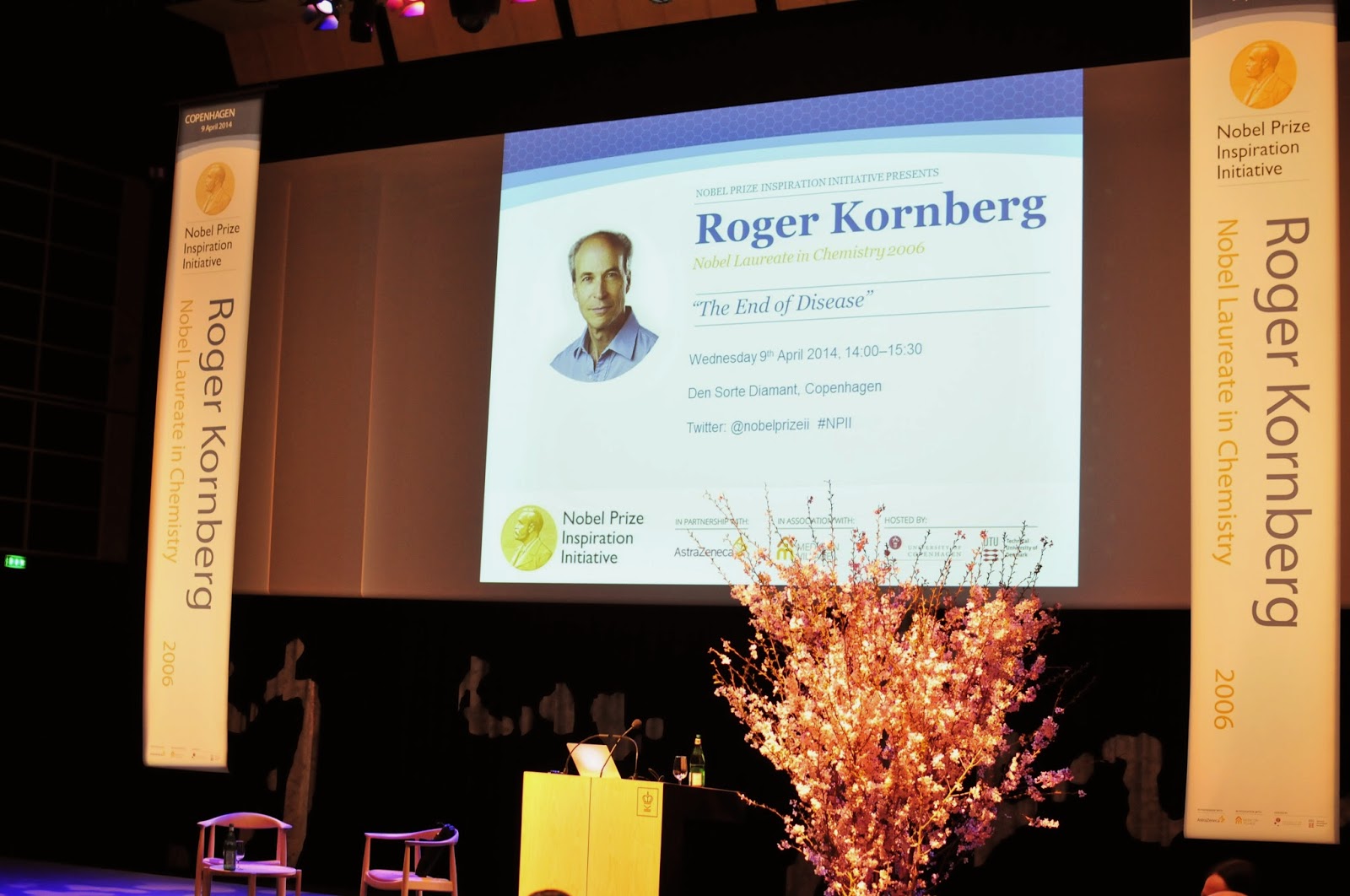 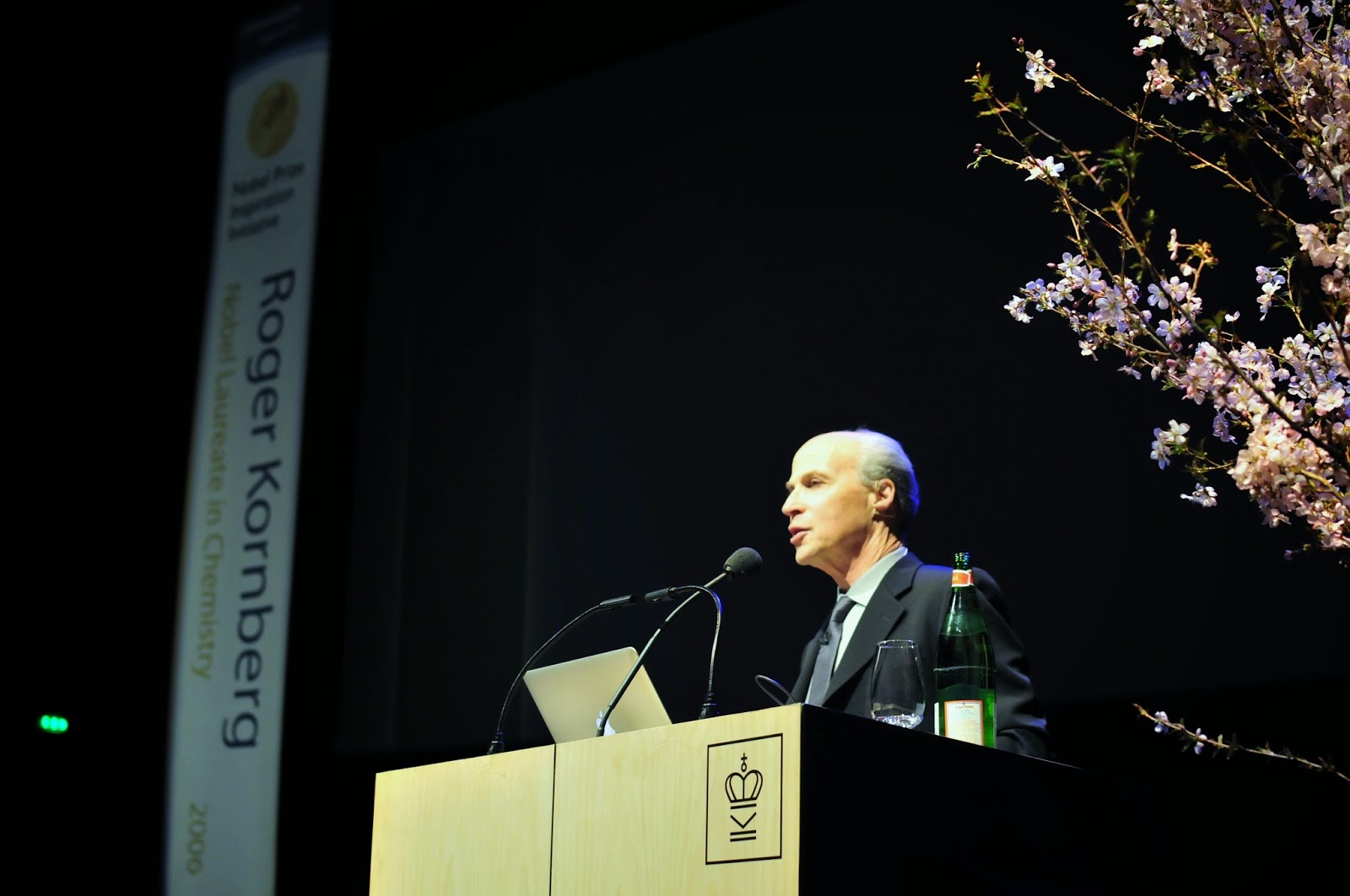 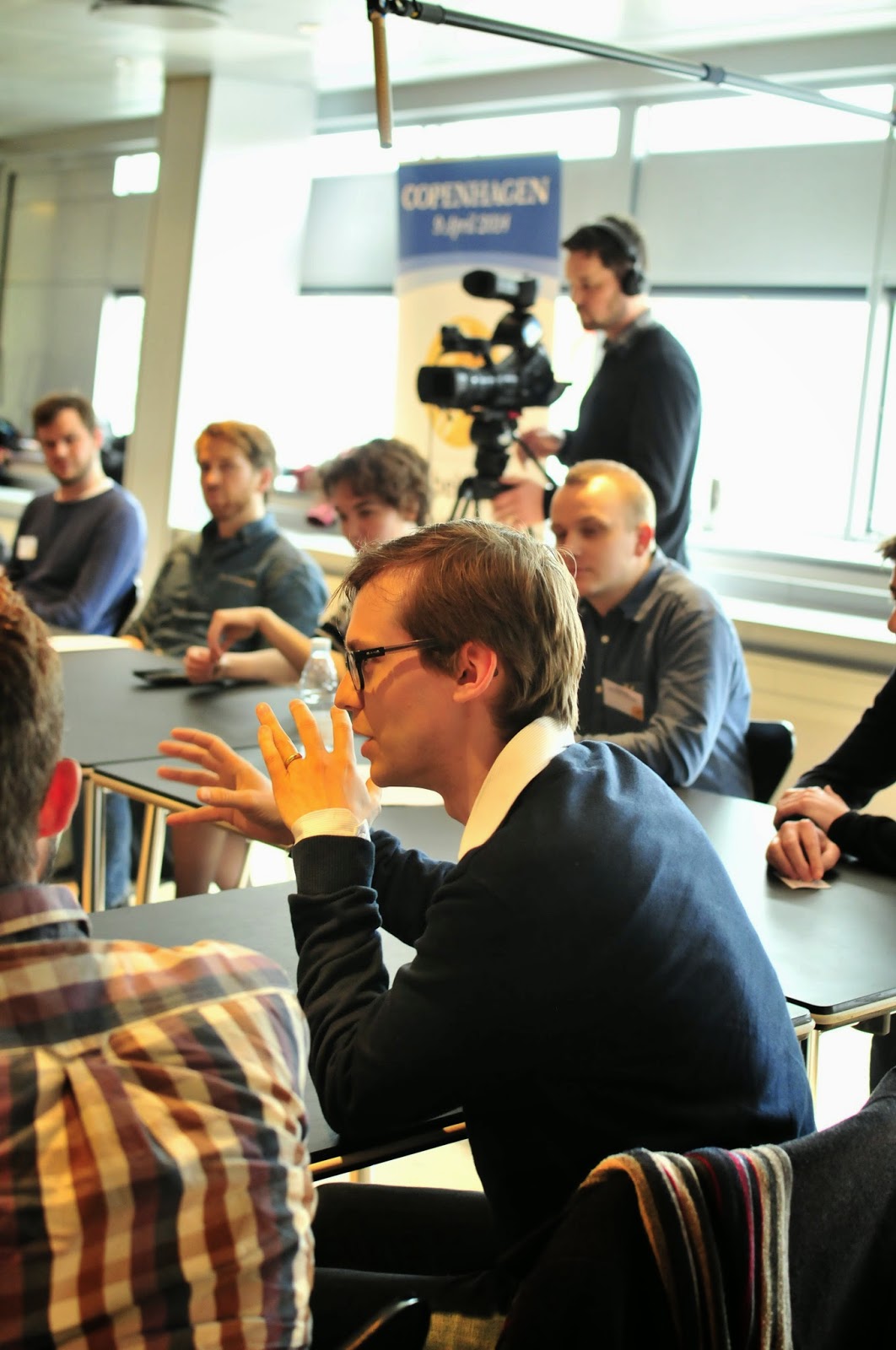 Dr Kornberg had some more media interviews, followed by a dinner in the famous Copenhagen venue, Nimb. But his day wasn't over. Dr Kornberg also found time to record a podcast with Adam, which you can listen to here: http://www.nobelprize.org/podcast/

We really enjoyed our visit to Copenhagen and Gothenburg - we promise to share the lecture video very soon, and keep an eye on the site for hints and tips from Dr Kornberg. We also had some lovely interactions on Storify, which you can read here.

The next Nobel Prize Inspiration Initiative event will be in China - we'll be bringing Tim Hunt to Shanghai and Chengdu on the 3rd June.... so lots more posts to come!
Posted by NPII at 03:39 1 comment: